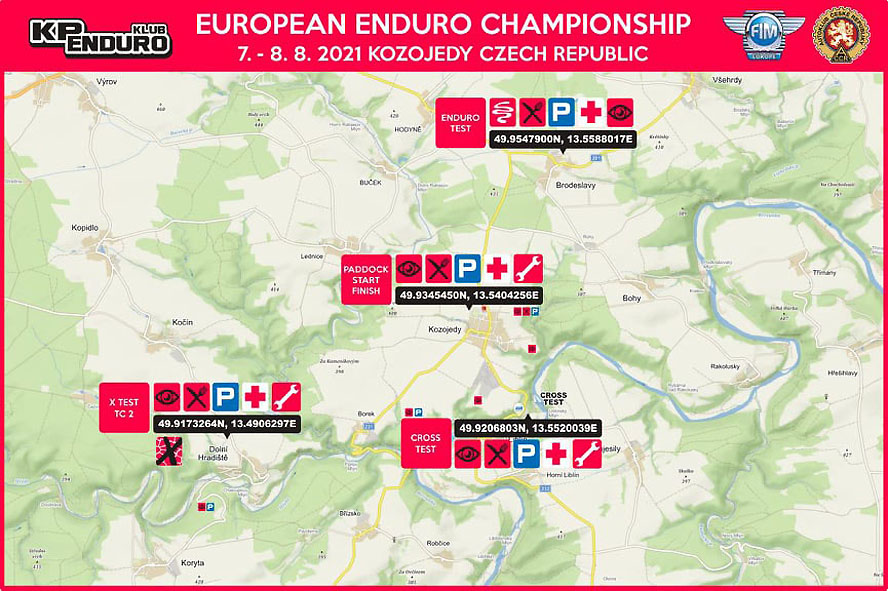 On Saturday, 7 August 2021, the European Enduro Championship started its first day in its second competition in the Czech Republic:

The favourite, Krystof Kouble, lived up to his role and made the most of his home advantage on the demanding course – the Czech rider came back from the first of the three rounds with three special stages each as the overall leader. He did not relinquish this position until the finish. But he had a crash in the very last special stage: „I was so excited and in such a hurry to get back on the bike that I didn’t lose much time. Luckily I didn’t hurt myself,” the Sherco rider was happy to report at the end.

After a crash in the extreme test, championship leader Enrico Rinaldi from Italy had to bury his hopes for another class win ahead of Kouble. Rinaldi took third place in the overall standings.

In second place, however, and surprisingly, was Dominik Olszowy from Poland, who had not yet competed in the European Championship. However, the KTM rider had just returned from the Hardenduro World Championship in Romania with a 10th place, so he was well prepared for the difficult track and difficult special stages. So he was also able to win the class of the over 250 cc four-stroke bikes.

A junior on the smallest displacement 125cc also put in a pleasingly strong performance: Pyry Juupaluoma from Finland rode to a sensational fifth place overall in all displacement classes! He won the junior class of the U21 riders with a lead of almost one minute.

In the women’s category, who did not ride the last extreme test, Nieve Holmes from Great Britain won on the GasGas ahead of the previous leader Justine Martel from France.

On the second day at the second round of the European Enduro Championship in Kozojedy, Czech Republic, the weather was definitely an issue. Although it was dry and warm during the day, the overnight rain had watered the track heavily beforehand.

But even under the more difficult conditions, it was the same riders who decided the victory among themselves: First and foremost local hero Krystof Kouble: „In the first lap it didn’t go well at all. I crashed once in each of the three stages and lost time. Only after half of the competition did I really get going.” But he forgot to mention, that despite the crashes, he had set the best time of all the riders.

For the other competitors also struggled with the demanding stages, which had become even more difficult due to the rain. Italian Enrico Rinaldi finished third on the unfamiliar terrain behind Dominik Olszowy and is right behind Kouble in second place  in the championship both, in the overall as in the junior E2 class.

Once again, junior Pyry Juupaluoma from Finland showed a very strong performance: on the smallest displacement 125cc, he again rode to a sensational fifth place overall! The 18-year-old also won the junior class of the U21 riders again. He thus fought his way up to third place in his championship.

The already very demanding track was made a few notches more difficult by the overnight rain: The first lap in particular provided special challenges in the uphills but also in the downhills. Just how difficult it actually was is shown by the fact that almost half of all participants who started on Saturday did not reach the finish on Sunday in the classification. Only 66 of the original 123 riders were able to bring their bikes properly to the parc ferme at the end.

In the senior class, only six of the original 19 participants finished. Winner Martin Gottvald as well as the runner-up, Milan Skuta, were able to use their home advantage because they are used to such conditions.

Nevertheless, there were no complaints, because it was not impossible, as many riders have had shown. But the spirit of enduro racing, of fighting through and arriving at the finish, was again extremely cultivated here. No wonder that the Pole Dominik Olszowy felt so comfortable there: The guest rider, who usually focuses on the Hardenduro World Championships, used the race in the Czech Republic to prepare for the World Team Championships. In three weeks, he will compete for the Polish national team. The 21-year-old set the bar high with a second place in the overall standings on the second day of the race.

The next round of the European Championship, then even in Olszowy’s home country Poland, will be after the „International Six Days Enduro” (ISDE) in September.

More information and schedules, results and links, there are always up to date and right on the official website:
http://european-enduro.com/